Profile of the Month: October – 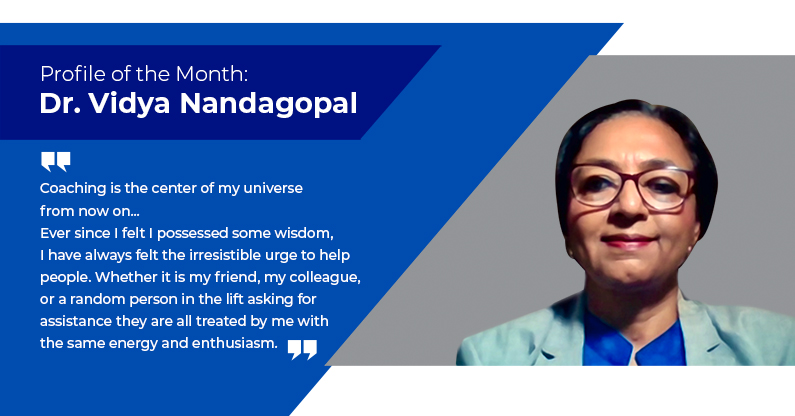 Coaching is the center of my universe from now on…

Ever since I felt I possessed some wisdom, I have always felt the irresistible urge to help people. Whether it is my friend, my colleague, or a random person in the lift asking for assistance they are all treated by me with the same energy and enthusiasm.

An example that sticks forever with me is the guy on the seat next to me in business class when I was going to visit my mother who had just suffered a heart attack.             He looked distinctly uncomfortable for quite a while until he suddenly broke down and started crying. I came to understand that he had just lost his unborn child (stillborn) and was going to see his wife who was still unconscious in the hospital; his discomfort had to do with the fact that he had to break the news to her. We both agreed that this seemed like a particularly difficult and challenging task. While he had lost the child too , he was being called upon to be brave and act as if it was fine, just so that he could calm his wife down whose reaction might be more severe.

Somehow, I managed to engage him in a positive conversation and he appeared much improved as he left the aircraft to go to his wife. A couple of years later I found a very warm message from him thanking me for supporting him on that flight. He and his wife had had another child who was the center of their world. They were incredibly happy. This incident gave me the feeling that I could soothe people when they are down. I have heard several colleagues talk openly about the positive vibes they get when they interact with me. One particular professor used to pass by my office and sit for at least 10 minutes in front of me talking shop before he started his day., I have helped several teenagers in my building along with graduating students at my University who found their life purpose with a great deal of success.

I met Lynn Stewart in 2017. She is the sister of Dr. Chérie and together with Michael Pomije, they three run MMS WORLDWIDE INSTITUTE which is accredited by ICF as a Coach Training Educational Provider. Lynn had great persistence and she was able to convince me to pursue becoming credentialed since she thought I had the brilliance required to become a coach. However, at that time I was battling too many issues in my life. Three years later I met Dr. Chérie and Michael who came to meet with me at University of Dubai. I was deeply touched by her humility and authenticity and at that very moment a magical connection was formed.

We went ahead with the partnership with MMS WORLDWIDE INSTITUTE, however, I was still not ready to embark upon my own certification. My health was on a downward spiral; My elder son had just broken off with his girlfriend and my younger son who was dong his Masters in Electrical engineering in US was on academic probation. I wasn’t even sure if he would graduate after having spent an enormous sum of money on his education. Everything about me and around me seemed to be falling apart. In the middle of all this, I decided to embark on the coach certification training. I have always found that the most precious things come to me in my most difficult moments. However, looking back after having received my first level credential of Associate Certified Coach, it feels amazing. Now after I have conducted over 100 hours of coaching, nothing feels as close to my skin as coaching does!!!

Whenever I coach a new person I am excited before I enter the session. After every session I feel a rush of energy in my entire system that seems rather magical. A great sense of satisfaction creeps over me. Every time I conduct a coaching session, I feel at least two inches taller. I am starting to believe that this is what I was meant to do all along. I now truly believe that God has a purpose for every one of us. This is one of the reasons that I am able to coach others to become the best version of themselves.

After going through all the challenges, obstacles, trials and tribulations throughout my life, I feel I am finally living my best life. I am now doing the things I want to do and am standing up for things that are important to me.

I have gotten rid of extra things and people from my life and am truly at peace with myself. I no longer feel suffocated or oppressed as I used to feel even a decade ago. I feel my true freedom and the ability to exercise my choices in the truest sense of the word. I am grateful for everything I have and also everything that was denied to me. Everything that has happened to me has made me who I am today. If someone asked me who you would want to reborn as my answer would be “My exact self.” I love myself and have stopped beating myself up; I no longer feel guilty for anything or anyone. Everything is as it should be: Perfect, authentic, and harmonious

The coaching journey I experienced gave me this realization.